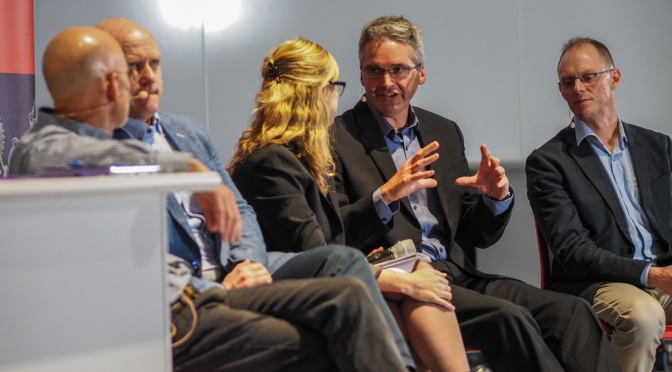 Bill McKibben has argued that “it’s possible that there’s no greater example of corporate irresponsibility than climate change – I mean, these companies melted the Arctic, and then rushed to drill in the open water. ”

With the recent revelations that oil giant Exxon has known about the likely catastrophic impacts of continued fossil fuel use as far back as 1981, it seems McKibben is spot on in his assessment. After all what could be more immoral and irresponsible than knowingly destroying the habitable climate of the only home we have – planet Earth!

Last Monday, the Sydney Environment Institute and Sydney Ideas hosted a special panel of speakers to discuss the role of business in the climate crisis. This also served as an opportunity for a Sydney launch of Daniel Nyberg and my new book Climate Change, Capitalism and Corporations: Processes of Creative Self-Destruction.

With guest speakers Professor Clive Hamilton, David Ritter (Greenpeace Aust CEO) and Amanda McKenzie (Climate Council CEO), and a large audience of several hundred in the University’s new Nanotechnology Hub we explored how business’s exploitation of the environment and the resulting climate crisis  now represents the greatest challenge our species faces ( a video of the presentations is available below).

Clive Hamilton outlined how governments are increasingly targeting environmentalists as the new ‘extremists’ and ‘radicals’. In his dissection of the recent Federal Government’s radicalisation propaganda, Professor Hamilton pointed out how such government framing conveniently ignores how the active destruction of a habitable Earth through the burning of fossil fuels is perhaps the most radical and extreme venture that could be imagined!

David Ritter set out his perspective on the role of environmental activism and the inseparable link to grassroots democracy. Here, he argued, climate change represents not only an existential crisis but also our best chance to reform our society into something far more equitable, participatory and fulfilling.

Finally, in outlining some of the key arguments of our book, I proposed that rather than seeing all companies and managers as somehow ‘evil’, our economic system is functioning exactly as it is meant to; by maximising short-term shareholder value. As a result, while many managers and executives are extremely concerned about the unfolding climate crisis and the world they will leave to their children, we are locked into an economic system that as Naomi Klein has argued is at war with the environment.

In the panel discussion that followed debate focused on how our neoliberal market society prevents governments from challenging the power of large multinational corporations and promotes corporate self-regulation. As we have seen in recent weeks, trade agreements like the Trans-Pacific Partnership further weaken national governments ability to pass laws that impinge upon corporate profitability.

Despite the grim nature of the climate crisis, Clive Hamilton ended the night on a positive note. Asking the audience to imagine a government that took climate change seriously, aimed for 100 per cent renewable energy by 2025, and divested from fossil fuel investments. He then pointed out that the ACT Government is doing that right now! Despite the Herculean nature of the challenge now facing us, in the words of Al Gore:

‘…we should feel a sense of joy that those of us alive today have a rare privilege that few generations in history have known: the chance to undertake an historic mission worthy of our best efforts. It should be seen as an honor to live in a time when the future of human civilization will be shaped forever by what we do now.’

One thought on “Panel Discussion on Climate Change, Capitalism and Corporations”