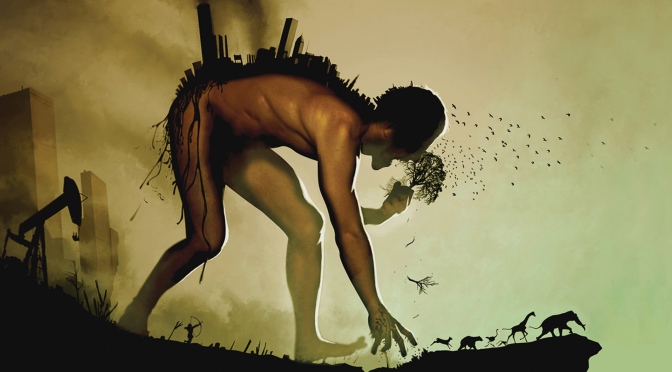 ‘Business as usual’ is no longer an option. In this book, Christopher Wright and Daniel Nyberg probe the roots of the climate crisis and reveal the intractable relationship that capitalism has with the degradation of the environment. Publishing one year after Naomi Klein’s This Changes Everything, Wright and Nyberg echo the sobering refrain that the problem with climate change is not emissions but capitalism. END_OF_DOCUMENT_TOKEN_TO_BE_REPLACED

Yesterday I talked with the group from Discourse Collective based in the US about climate change and the political economy underpinning the climate crisis. The podcast below links to many of the arguments from our book Climate Change, Capitalism and Corporations: Processes of Creative Self-Destruction, and includes a pretty wide-ranging discussion of where things are heading in our near dystopian future…it also features a remix of David Bowie’s “Cat People” a brilliantly appropriate lead-in to the discussion!

Sustainability has become an increasingly fashionable concept in management education as business schools seek to respond to growing social criticism of business activities. Unfortunately, much of what passes for sustainability teaching involves co-option of the concept of sustainability within existing neoliberal discourse. So, is teaching sustainability in a meaningful way possible in the business school, and if so what might it look like? Recently Daniel Nyberg and I wrote a chapter for a book on Reinventing Management Education that seeks to address this question (you can read a pre-publication version here). What follows is a summary of some of our arguments. END_OF_DOCUMENT_TOKEN_TO_BE_REPLACED

On Tuesday last week at RMIT in Melbourne, leading public intellectual and La Trobe University Emeritus Professor, Robert Manne launched our new book Climate Change, Capitalism and Corporations. We are indebted to Robert for agreeing to launch our book, as he has been one of the most articulate and considered commentators confronting the issue of climate change and its poisoned political legacy.

Robert’s regular analyses of climate politics had a deep impact on my own thinking about the climate crisis. In particular, I remember having started the research that would result in our book back in 2010,  reading one of Robert’s insightful analyses of the political impasse over climate change in The Monthly magazine during a trip to Europe. As the train hurtled through the countryside between Frankfurt and Amsterdam, I looked up from the article to see row upon row of wind turbines turning in the late afternoon sunlight; the contrast with fossil fuel addicted Australia couldn’t have been more obvious. END_OF_DOCUMENT_TOKEN_TO_BE_REPLACED

It’s hard to know how to approach the phenomenon that is Naomi Klein’s This Changes Everything: Capitalism Vs. The Climate. In case you’ve been living in a remote cave for the last six months, this is the book that came out last September to rave reviews in the world’s major newspapers, which has been serialised on the front page of The Guardian over several days, and which has both left-wing commentators and even some conservatives singing its praises. There is also a documentary film coming out to accompany the book and sell out presentations by the author around the world linked to climate activist events. So this book comes with huge media fanfare and expectation. END_OF_DOCUMENT_TOKEN_TO_BE_REPLACED

In researching the practice of corporate sustainability, many of the people I interview highlight the problem of trying to promote and live in a more sustainable way. Here, they stress how trying to take public transport, reduce your carbon footprint, choose renewable power, or build a sustainable home, seem to be increasingly difficult and costly, as if our entire economic system is biased against sustainable options. As one manager put it ‘I feel like I’m working upstream all the time.’