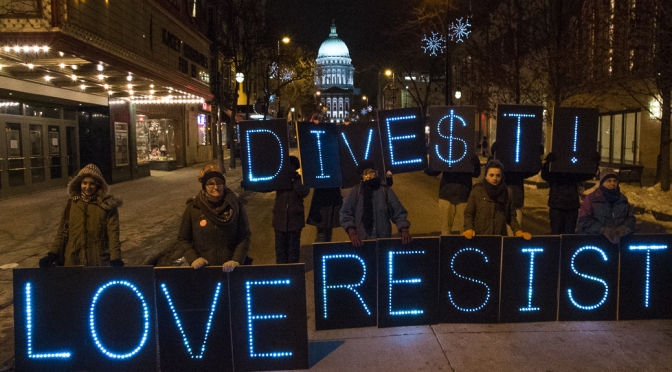 Earlier in the year I was asked to talk at a Politics in the Pub event on the subject of ‘How Effective Is the Fossil Fuel Divestment Movement in Speeding up Action on Climate Change?’.  I shared the stage with Blair Palese, Australian CEO of 350.org, and it was an opportunity to talk about how divestment might contribute to a more effective political response to the climate crisis. Below is an abridged version of my talk and you can view a video of the presentation at the bottom of this post.

Way back in late 2006 I attended a family gathering on a sunny Sunday by the waterfront at Manly beach. Some relatives had flown down from rural Queensland for the event and over lunch I heard about a side of Australian life I was completely unfamiliar with. Our relatives were pioneers in the beef cattle industry but in our conversation several issues kept resurfacing that linked to my interest in climate change. The first of these was the unparalleled ‘Millenial’ drought that they were battling through. The second was the scourge of  large open-cut mines that were expanding and growing across rural Australia. Not only were these huge pits a visual and territorial imposition, but they were also attracting their sons and daughters away from the cattle industry. There was now no new generation to take on the cattle business once the current generation moved on.

At about this time I was reading through Nicholas Stern’s ground-breaking treatise on the economics of climate change which had just been released. I can remember being struck by the disconnect between these lunchtime observations of the massive expansion of Australian coal mining and the equally persuasive logic that Stern had amassed that we had reached a tipping point with regard to fossil fuels like coal. Combined with the popular appeal of Al Gore’s movie An Inconvenient Truth released about the same time, I truly believed that our political leaders had finally got it; that they understood the existential risk we as a species faced due to our fossil fuel addiction.

So fast forward to the present. Here we are in 2015, with our Prime Minister proclaiming ‘coal is good for humanity’, with amongst the highest per capita carbon emissions in the world, and the dubious distinction of being the first nation to have repealed a carbon pricing mechanism. Business as usual seems as firm as ever!

Into this space in the last several years has appeared a very different form of response – the idea of fossil fuel divestment. This rapidly growing grassroots movement encourages major organisations to shift their financial investments from fossil-fuel stocks. As 350.org founder Bill McKibben explained:

‘The logic of divestment couldn’t be simpler: if it’s wrong to wreck the climate then it’s wrong to profit from that wreckage. The fossil fuel industry … has five times as much carbon in its reserves as even the most conservative governments on Earth say is safe to burn – but on the current course it will be burned, tanking the planet. The hope is that divestment is one way to weaken those companies – financially but even more politically. If institutions like colleges and churches turn them into pariahs then their two-decades-old chokehold on politics in DC and other capitals will start to slip.’

It’s an idea that has rapidly caught on. The last time I looked, around 180 organisations, most of them from civil society, have committed to divest from fossil fuels. Stanford University, the cities of Seattle, San Francisco, and Portland, the World Council of Churches, Glasgow University, the British Medical Association, and, maybe most symbolically, the Rockefeller Foundation – which owes its $860 million in wealth to the founder of the US oil industry, John D. Rockefeller– are among those to have joined the cause. While still far from the type of market and regulatory disruption needed to trigger a wholesale move from fossil fuels to renewable energy, divestment is undoubtedly an alternative narrative to the mainstream model of ‘business as usual’.

Now in response we have seen some strong criticism of fossil fuel divestment. Critics have for instance argued that:

Now to some extent these critics have a point. It seems unlikely that even with the rapid take-up of divestment across a broad range of civil society organisations, this will probably not have a major impact upon the share price of the fossil fuel majors.

However the criticism from conservatives (and indeed some progressives) misses the more fundamental point, that the key objective of fossil fuel divestment is symbolic and political influence. This is a political battle for the hearts and minds of populations and their attitudes towards a source of energy that is systemically embedded in our very way of life. Divestment seeks to upset the comfortable acceptance of fossil fuels as an accepted and legitimate source of energy and economic well-being. It seeks to highlight the clear and present danger that fossil fuel companies pose to the future of our species if we maintain business as usual.

Most importantly however, as David Roberts has so wonderfully argued, divestment makes climate change a fundamentally moral issue. This is something the political Right have always implicitly understood. The reason that the Tea Party in the US or indeed many in Tony Abbott’s cabinet are so vehemently opposed to any action on climate change is because accepting climate science necessarily involves accepting the need for government regulation, taxes on carbon use and a rejection of the moral sanctity of free-market capitalism. As Naomi Klein explains in her excellent book This Changes Everything, hardcore conservatives:

‘…have come to understand that as soon as they admit that climate change is real, they will lose the central ideological battle of our time – whether we need to plan and manage our societies to reflect our goals and values, or whether that task can be left to the magic of the market.’ (p.40)

To date, many of those proposing action on climate change have clung to the assumption that all we really need to do is communicate the science, and once people understand ‘the facts’ they will logically change their behaviour and vote for leaders who will take action in reducing GHG emissions.

This techno-rationalist perspective has been behind most of the moves developed by progressive politicians, climate scientists and even many environmental groups (witness the worship of ‘market mechanisms’, industry self-regulation and ‘corporate environmentalism’). It is evident in the five-yearly publication of IPCC climate change reports and a more general obsession with removing emotion, passion and morality from the climate change debate. Far better, proponents argue to promote rationality of facts and data and the people will follow. Well newsflash – this strategy hasn’t worked!

Unfortunately, missing from such views is a recognition that political battles are won and lost not upon the merits of facts and data but by the human emotions upon which cognition and decision-making is structured. As Professor Andy Hoffman from the University of Michigan has pointed out:

‘The public debate around climate change is no longer about science—it’s about values, culture, and ideology.’

And this is where I see real hope for a step change in climate action being driven by the fossil fuel divestment movement, because this is a strategy which seeks to make climate change a moral issue, much as earlier examples such as the abolition of slavery, or calls for the end of Apartheid were essentially moral campaigns. This is a key reason why conservative groups have recently become so worried about the entry of major religious leaders like the Pope into the area of climate politics. By getting people to reflect on their financial investment in activities which are destroying our world, and undermining the legitimacy of those institutions, we are also connecting them to the deeper moral and emotional connections on climate that are so often marginalised in political and organisational discourse.

So, one indication of the impact of this emergent political narrative has been the vehemence of the response from the fossil fuel industry and conservative politicians . Oil companies like ExxonMobil, Shell and BP have responded frostily to claims that they may be holding ‘stranded assets’ in the near future. Australian National University’s announcement late last year that it would be divesting from an array of resource stocks promoted a caustic retort from not only the Minerals Council, but also vitriol from both Treasurer Hockey and Prime Minister Abbott .

The strength of the response suggests the divestment movement is having a very real impact. This growing public awareness is now seriously challenging the legitimacy of the fossil fuel industry in very basic ways. And if this movement can recast public perceptions of fossil fuels as the new tobacco or asbestos then we are likely to see further political demands for action towards the large-sale uptake of renewable energy sources.

So I’m optimistic that grassroots social movements like fossil fuel divestment offer a way forward in the on-going political battle over the climate crisis. I’m optimistic because they are explicit that the choices we now face over our future are fundamentally moral choices. As David Roberts concludes:

‘Nobody thinks the divestment movement can hurt fossil-fuel companies in any direct financial way, but that’s not what it seeks to do. Rather, it seeks to put mainstream institutions on record defining climate mitigation as a moral imperative, to create social consensus that inaction is not neutral — it is immoral.’