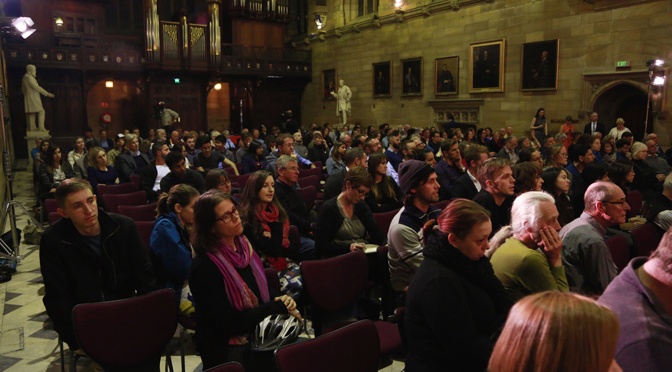 Last Monday Greens Leader Christine Milne delivered a landmark speech at the University of Sydney on the next steps for global warming policy around the world and Australia’s role as we approach the 21st Conference of the Parties (COP 21) in Paris this year.

I participated in the event as one of the respondents to Senator Milne’s address and was asked to comment on ‘what role business should play in effective climate change response?’ My response is set out below, but one theme that emerged in the discussion is whether business has an ethical responsibility in its response to climate change? I argue that it does, and this excellent article by David Roberts today highlights the broader way in which climate change is being viewed as a moral imperative and why this frightens those opposed to action on climate change. This an issue business seems unprepared to deal with, but as the climate crisis worsens and its moral implications become more apparent, it is one businesses need to increasingly engage with.

What role should business play in effective climate change response?

Now if you’d asked me this question 8 years ago you probably would have got a very different answer. Back in 2007, like a lot of people I’d become increasingly aware of climate change. I’d watched Al Gore’s Inconvenient Truth, I’d read Nicholas Stern’s report, and in the middle of the Millennial Drought – it seemed quite evident that the ground under our feet was shifting fundamentally.

Against this background, I began a research project exploring Australian business responses to climate change. We studied a range of major corporations focused on this issue:

Following the Stern Report it seemed even conventional economics had grasped the logic of climate science and how our reliance on fossil fuels was unsustainable. Major change in the very nature of business seemed not only likely, but inevitable.

And yet how wrong I was. Here we are in 2015, with our Prime Minister proclaiming ‘coal is good for humanity’, with amongst the highest per capita carbon emissions in the world, and the dubious distinction of being the first nation to have repealed a carbon pricing mechanism.

So what happened over the last 8 years? Well in a nutshell the global fossil fuel industry and its political allies successfully sowed the seeds of doubt about climate science across large portions of the western populace. The power of fossil fuel and mining interests in shaping climate policy has been particularly evident in Australia, where as Clive Hamilton and Guy Pearse have argued, the so-called “greenhouse mafia” of corporate lobbyists were central to our national intransigence to climate action.

The story of the rise of organised climate change denial is well documented, and its success is evident in changing public opinion and the weak political engagement on climate action we see today. While the endorsement of the Kyoto Protocol under the Rudd Labor government, and eventual adoption of carbon pricing under the Gillard government, saw some limited reversal of this trend, as Senator Milne has noted with the return of a conservative government we are now back in the fossil fuel Dark Ages.

This collapse of political will has nothing to do with climate science. As Professor Andrew Hoffman from the University of Michigan notes ‘The public debate around climate change is no longer about science—it’s about values, culture, and ideology.’ Indeed over those last 8 years the science has become even more forthright in its urgency. Last year’s worst-case scenario has become our best-case, and we have witnessed a procession of extreme weather events and shifts of such magnitude that they seem more like science fiction than reality. As Senator Milne has noted, if the melting Arctic and methane venting from a warming Siberian tundra were not enough, then the announcement last year by glaciologists of the ‘unstoppable’ collapse of the West Antarctic ice sheet and multiple metre rises in sea levels, certainly focuses one’s attention.

To date, the business response to climate change appears to have gone into reverse. We have embraced a ‘fossil fuels forever’ imaginary, in which our traditional reliance on the extraction, export and use of coal, oil and gas continues unabated. The business community’s vision appears limited to ‘business as usual’.

Of course it’s unfair to characterise Australian business as uniform in its response to climate change. As I noted earlier, many prominent companies have not only highlighted the importance of climate science, but also implemented practices to reduce their own climate impact. Initiatives such as the Australian Business Roundtable on Climate Change begun in the mid-2000s by the then CEOs of companies like Westpac, Insurance Australia Group, Visy and Origin Energy, advocated for government action on emissions reduction. Added to this, new innovative companies like US car manufacturer Tesla, are challenging the traditional fossil fuel mindset and looking to a new greener economy driven by renewable energy.

Indeed, the ‘business case’ for acting on climate change is not a hard one to make. It is readily ‘frameable’ in the language of physical, reputational, regulatory and market risk. It’s about reducing costs through more efficient operations and energy usage. It’s about reducing waste. It’s about attracting and retaining employees who are passionate about the environment and the world we will leave behind for our children.

But corporate environmentalism on its own is not enough. We cannot rely on progressive businesses ‘seeing the light’ on climate and reforming their activities. At best, we will end up with islands of excellence in a sea of mediocrity. In fact, making your business more eco-efficient doesn’t necessarily improve environmental outcomes as businesses aim to grow markets and expand consumption. Being a little less unsustainable is not the same as being sustainable.

Moreover, it is supremely dangerous to assume market mechanisms and corporate capitalism are ‘the answer’ to the climate crisis. In an age of neoliberalism we seem to have forgotten that markets are good servants but very poor masters. It might seem unfashionable, but in responding to the scale of the climate crisis we will likely need government regulation of carbon emissions of a potentially punitive kind!

As Senator Milne has pointed out, the science is unequivocal. To avoid exceeding global warming of 2 degrees Celsius this century, we must limit ourselves to a defined budget of carbon emissions. Unfortunately, known fossil fuel reserves exceed this budget by a factor of 5. For Australia, this means that to avoid dangerous climate change, around 90 per cent of our fossil fuel reserves need to stay in the ground.

So, what should business be doing?

Firstly, the implications of climate change for business are not just an economic issue, they extend to the role of business in modern society and questions of ethical leadership. For those firms and industries most centrally involved in the production, export and use of fossil fuels, the moral implications of climate change couldn’t be clearer. As environmentalist Bill McKibben has pointed out: ‘if it’s wrong to wreck the climate, it’s wrong to profit from that wreckage’.

Secondly, the business community needs to develop a far more constructive approach to the climate crisis. Responding to climate change requires system-wide mobilisation, guided by government and involving all stakeholders. This means business needs to move beyond its traditional lowest-common denominator approach in lobbying government on emissions reduction and renewable energy targets, and accept the need for fundamental regulatory change.

Thirdly, while corporations underpin our escalating carbon emissions, they are also a key source of innovation necessary for the decarbonisation of our economy. This means businesses need to get serious about capacity building for the economic transformation from fossil fuels to renewable energy. They need to approach the physical, market and other risks climate change poses, with the same seriousness they devote to quarterly sales and profits forecasts. This is not only about risk minimisation but also identifying the opportunities that can flow from genuine green growth.

Climate change is the greatest challenge we will face this century. We urgently need business leaders who understand the climate crisis and its profound consequences. Of course given such a grim future, it is easier to ignore the threat and live in the moment in our comfortable, affluent society. However, there is also something uplifting in recognising the scale of the challenge we now face. As Al Gore argues:

‘…we should feel a sense of joy that those of us alive today have a rare privilege that few generations in history have known: the chance to undertake an historic mission worthy of our best efforts. It should be seen as an honor to live in a time when the future of human civilization will be shaped forever by what we do now.’

2 thoughts on “Climate change as a moral issue for business?”