That the social debate around climate change is a ‘culture war’ should come as no surprise to anyone observing current political debate in Australia, the US, UK and Canada. In contrast to much of the rest of the world where climate science is rarely debated, in the Anglo-Saxon world the culture war around climate change rages on with increasing vehemence.

In Australia, the election of the conservative Abbott Government has been marked by a targeted hostility to all things climate change. This has included the introduction of legislation to repeal carbon pricing, the disbanding of the Climate Commission, cuts to the Australian Renewable Energy Agency (ARENA), the PM’s business advisor publicly stating that climate change is a ‘myth’, former Prime Minister and Abbott mentor John Howard expressing his ‘agnosticism’ about climate change; and the list goes on.

This focus on climate change has also extended to research funding. For instance in the lead-up to the election, Liberal MP Jamie Briggs claimed the discovery of widespread ‘waste’ in Australian Research Council (ARC) grant funding of ‘increasingly ridiculous research grants’, with a special focus on funding in the humanities especially those projects that mentioned ‘climate change’. This message was amplified by the Murdoch press and climate skeptic bloggers such as Jo Nova. More recently, Government cuts to CSIRO funding have been reported as resulting in major staffing reductions at Australia’s premier scientific research establishment.

And last Thursday we were treated to another sign of the new Government’s attitude to climate change research. As reported in Hansard, Queensland Liberal Senator Ian Macdonald stated that he believed far too many research grants were being awarded by the ARC to studies of climate change, a situation he characterised as ‘appalling’ (pp.88-9). Indeed he argued that:

‘unless you indicated in your application for a research grant that you were doing something with climate change then you were unlikely to get a grant, with the result that if you applied for pure and applied research in areas that did not relate to climate change you were, as I say, unlikely to receive funding.’

The Senator implied that this over-emphasis on climate change in grant funding was the product of ideological fashion dictated by the previous Labor Government. However, he provided no evidence to support these claims. Indeed, an analysis of past ARC Discovery grant rounds from 2002-2013 demonstrates that less than 4% of awarded grants have addressed the topic of climate change (with the high point being 2010 when 7.4% of grants had a climate change focus, dropping to just 2.9% in the latest Discovery round). These figures certainly don’t suggest the sort of subject bias suggested by Senator Macdonald. Moreover, I would think the ARC itself would be somewhat surprised at the Senator’s claims given the ARC’s traditional independence in the rigorous assessment of grant applications.

However, perhaps more alarming is the tenor of the Senator’s speech suggesting that climate change should be less of a focus for future scientific and academic research funding. Given that climate change (and associated issues such as ocean acidification) is probably the most pressing environmental, economic and social issue confronting our nation, this would appear to be an amazing position for a national government to adopt.

In discussing this issue with colleagues there has been much anecdotal commentary that it would be unwise to submit a grant application focussing on climate change in the coming ARC round given the apparent political hostility to the issue. I’d like to think this sort of supposition is misguided, however having read the good Senator’s speech I’m beginning to wonder whether my colleagues fears might have some foundation.

With the next round of ARC Discovery projects due for submission early next year, here’s hoping the Minister for Education clears up this uncertainty and takes the Senator at his word that future ARC grant rounds do ‘not run to the ideological direction of the government of the day’! 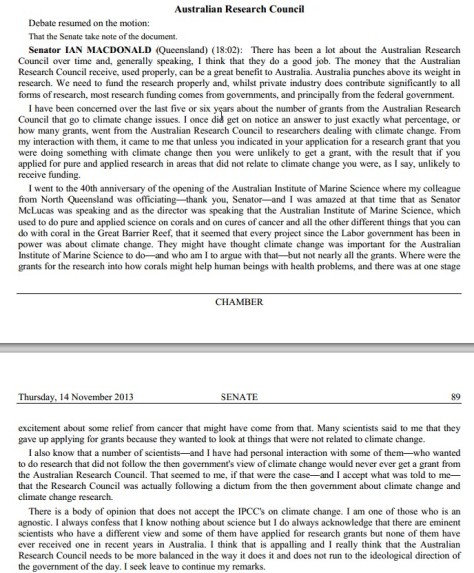