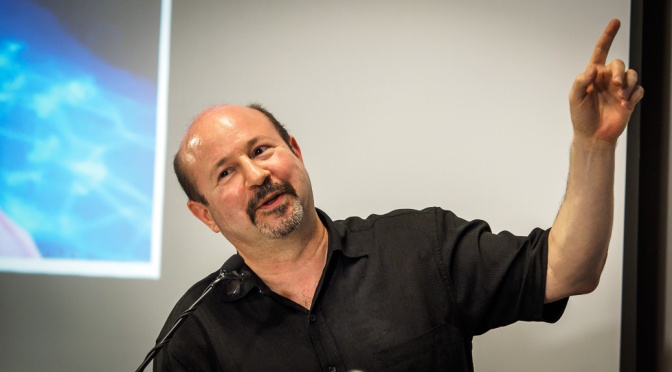 Last week the Sydney Environment Institute and the Balanced Enterprise Research Network at the University of Sydney Business School hosted a visit to Australia by world-renowned climate scientist Professor Michael Mann. Professor Mann is Distinguished Professor of Atmospheric Science at Penn State, with joint appointments in the Department of Geosciences and the Earth and Environmental Systems Institute (EESI). He is also director of the Penn State Earth System Science Center (ESSC).

As one of the world’s leading climate scientists, Professor Mann is famous not only for his ground-breaking work in analysing the Earth’s past climate patterns (including the famous ‘hockey stick graph’) but also in his long battle against the political denial of climate science in the US. As documented in his 2012 best-seller The Hockey Stick and the Climate Wars, Professor Mann is especially qualified to speak on the ‘hardball’ nature of climate politics having experienced first-hand the wrath of the fossil-fuel funded, climate change denial industry. Like Big Tobacco before them, fossil fuel advocates have attacked mainstream climate science to confuse the public and policy makers about the reality and threat of human-caused climate change. As he documents of his own experience, this has involved attacks from conservative politicians and right-wing lobby groups, orchestrated campaigns of harassment via mainstream and social media, challenges to job security and career, and even, death threats.

Professor Mann’s week-long visit to the University of Sydney was ironically ‘well-timed’ given recent developments in the US and Australia. When we first began planning Professor Mann’s visit over a year ago, little did we know that real estate mogul and reality TV star Donald J. Trump would be the 45th President of the United States thus presaging a new Dark Age of climate politics! In just the last several weeks of controversial executive orders, President Trump has decreed the expansion of major fossil fuel developments including the controversial Keystone XL and Dakota Access oil pipelines, and the neutering of long-standing environmental protections. In addition, he and his leadership team have made it plain they intend to dismantle many of the Obama administration’s climate initiatives and withdraw from the Paris Climate Agreement. All this of course, runs in direct counterpoint to the rapid decarbonisation rapidly required to avoid dangerous climate change.

Meanwhile in Australia, Prime Minister Malcolm Turnbull and his senior ministers appear to have locked in a ‘fossil fuels forever’ strategy by proposing government backing for new coal-fired power stations as part of the government’s response to Australia’s ‘energy security’ and expressing reticence over the country’s Renewable Energy Target. The sight of Federal Treasurer Scott Morrison last week berating the Opposition with a lump of coal, while the country’s eastern states sweltered under a record-breaking heatwave and catastrophic bushfires, added a perfectly surreal air to the toxic stupidity of our local climate politics. Welcome to the madhouse!

During his visit to Sydney, Professor Mann engaged actively with the media to emphasise the latest findings of climate scientists and the emergency situation we now face if we are to avoid a worsening climate crisis. His public Sydney Ideas lecture was delivered to a capacity crowd of well over 500 at the University of Sydney’s new Abercrombie auditorium, where he outlined the basis of climate change denial as set out in his new book The Madhouse Effect: How Climate Change Denial Is Threatening Our Planet, Destroying Our Politics, and Driving Us Crazy (you can view a full video of the talk below). Professor Mann was also the focus of a special Sydney Environment Institute symposium on ‘Climate Change and Climate Politics: Where to Now?’ and several smaller business gatherings where senior executives explored the current and future implications of climate change risk.

As Professor Mann emphasised during his many speaking engagements, decarbonisation and the shift towards clean, renewable energy is well underway globally. Indeed, this goes a large way to explain the growing vehemence of climate denial in our daily political discourse. The fossil fuel industry can see the writing on the wall and the current strategy of misinformation aims to spread doubt about the science in order to delay action and hold out as long as they can. The bizarre nature of current political debate is indicative of this trend, as our political leaders and the media degenerate into unreality, ‘alternative facts’ and straight up denial of science. Against this we have a growing number of scientists, like Professor Mann, willing to speak out publicly about climate science and confront the politically-informed denial industry. If we want to escape the madhouse of climate denial, we need to listen to what these scientists are telling us and act with urgency if we are to minimise the harm climate change will wreak for current and future generations!